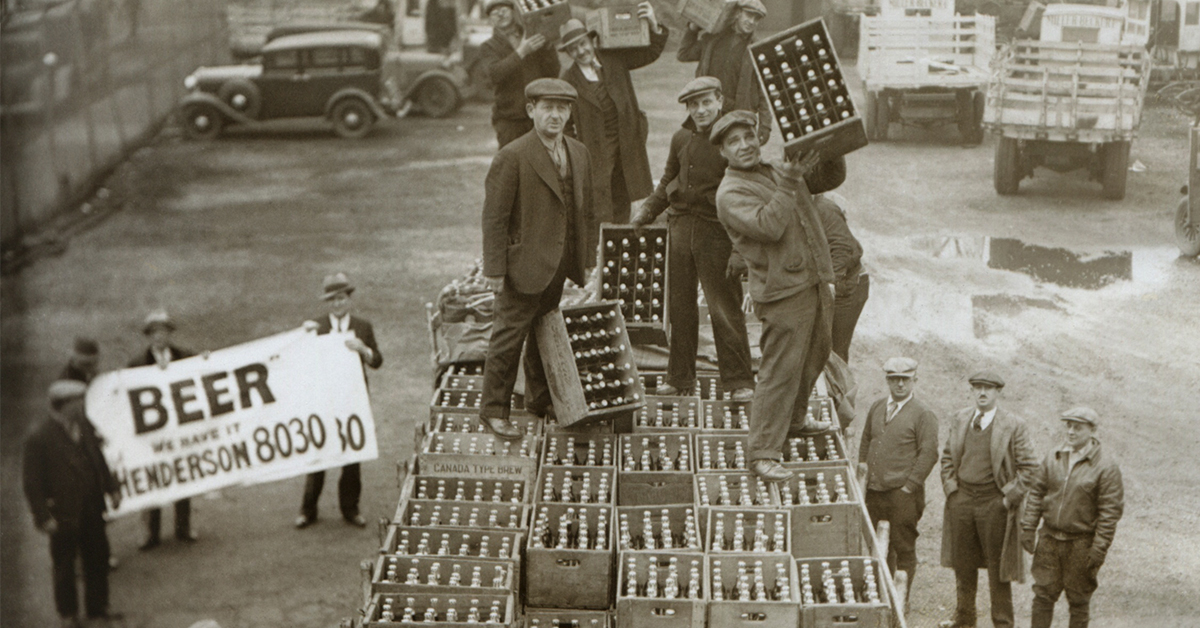 War, prohibition and the threat of modern beer

The 1900’s was probably the most eventful century for beer with a great deal of hardship, a lot of styles were almost lost.

The great wars in many ways were tough on beer, in England, there were shortages in barley rationing of resources, increasing of taxes and shortening of pub hours that meant by 1918, the government required half of all beer produced to be less than 3%. This hardship compounded with beer losing popularity compared to cocktails and wine due to apparent lack in sophistication resulted in many breweries closing. However, there was an increase in beers popularity in the late 1930’s, but with the destruction of so many English breweries and pubs in the Second World War by 1950, there were about a third fewer breweries than there was before the war. Therefore even though all of the classic English styles were well established by 1900, they became lower in alcohol and more adjunct filled by the end of the century.

America wasn’t that much better off, with prohibition followed by the Second World War really hurting the brewing industry. In 1934 a year after the prohibition ended, there were only 756 breweries in the United States. Most of the breweries and beer gardens at this time were run by American-Germans and many of these people had to go into hiding after the war.

With all this hardship on beer and the breweries, the quality of commercial beer plunged and the way beer was consumed was also changing. Up until this point beer was mostly sold and consumed in bars rather than in the home, but by 1945 it was reversed. The relatively low number of breweries worldwide combined with the strength of marketing lead to an arms race from breweries to consolidate, decrease production time and get the most product to sell at rock-bottom prices. By the 1960’s in the USA, many of the beer styles from before prohibition all but vanished and were replaced by light crips lagers with higher and hight portions of corn and rice.

England was similar with traditional cask ale being replaced by ‘sterile’ kegged beer that was delivered by truck and hosed into large serving tanks in the bar’s cellar. With cask ale, it is not difficult to see why it did not agree with the principles of big business. Cask beer, while having a rich and complex flavour, requires a lot of attention to get from the brewery to the glass, like subtle handling and maintenance both from the brewer and the cellar master. The result of all this work is a product that can only be served for a few days before it is flat and potentially contaminated and oxidised.

However, this threat from modern beer was fought by organisations like ‘Campaign for real ales’ (CAMRA) in England and The Brewers Association in the USA, that both started in the 1970’s, which allowed the traditional styles to retain a small foothold in commercial beer production later to be known as craft beer.

The early 20th century has seen an exponential growth in the craft beer sector and more and more people getting into the hobby of homebrewing.

The traditional and flavourful beer styles had a near death experience in the 19th century, buried in the ashes of big beer it rose like a phoenix in the 20th century. Europe didn’t suffer as badly as the United States due to the proud brewing traditions of Germany, Belgium and the United Kingdom and many beer styles came back into regular production and in traditional wine countries like France and Italy, new beer cultures are being built from scratch with great success.

In the USA a further change in 1979 to the 21st amendment of the constitution, repealing prohibition in 1933, meant that beer produced at home for family consumption was exempt from taxation making homebrewing officially legal. While it would take until 2013 for every state to make homebrewing legal it was enough to start the craft beer revolution to where it is today, from the brewers association survey last year homebrewers are the third largest producers of craft beer in the US.

Other countries like the Netherlands, New Zealand, Canada, Austrailia and Japan have also taken up this call of craft beer and in the last 10 years, the number of breweries and new beer styles has reached new highs.

So cheers to beer, from its humble beginnings to such a fundamental part of history, society and the core of our business here at the Grainfather. Long may it continue!