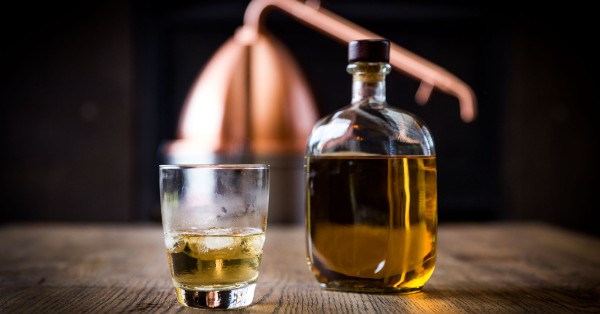 Distilling beer into whiskey won’t fix egregious falts and produce a great whiskey, but it is perfect for good beer that’s a bit past its prime, plus you need the keg, bottles or space in the fridge/ kegerator. Then distilling the beer will give you some more space for beer and as a bonus a bottle or two of whiskey.

Last year for we posted some Christmas recipes for the blog, and they were delicious but being summer here in the southern hemisphere it was difficult to drink large amounts of the stout and porter, especially when we had so many good pale ales and lagers on tap here at Grainfather.

So at the beginning of the year, we had about 15 L (3.9 US Gal) of the American Toffee Porter left in the keg (See link below), and I thought it was about time to change this out for something else. But it was tasting so good that I didn’t want to dump it and the thought of a toffee whiskey made our mouths water.

The beer had been sitting stationary in the keg for more than six months and was. Therefore, any remaining yeast had settled out and so no more clarifying agents were added. The beer was transferred from the keg into the Grainfather, it doesn’t matter that it was cold nor that it is carbonated. Five capfuls of Still Spirits distilling conditioner and boil chips were added since beers tend to have a higher protein content than most all grain washes.

The Grainfather with Alembic and collection vessel was set up and water flow set to just over 2.5 L (0.66 US Gal) per min.  The heating was then turned on and set to 65% power. Turn the water on when the thermometer at the top of the Alembic reached 400C (104°f), and all the spirit was collected until the spirit got to 30% ABV

The spirit from the spirit run was diluted to 10 L (2.6US Gal) with distilled water and added back to the empty, cleaned grainfather, boiling chips were re-added. The  Alembic and collection vessels were set up and water flow set to just over 2.5 L per min. The heating was then turned on and set to 65% power. Turn the water on when the thermometer at the top of the Alembic reached 400C. Because beers are fermented cooler, and under more control, the methanol content is much lower than traditional spirit washes so I typically throw away the first 50ml, then collect the heads in 50ml containers. I typically collect 4 or 5 50ml lots of heads before I collect the hearts. When the hearts get around 32% ABV, I start collecting the tails again 4 or 5x 50ml.

After blending the heads, hearts and tails, I had just over a litre of 40% ABV whiskey which I aged on a 3cm charred American oak spiral for a month. The resulting whiskey had a nice golden colour and a good toffee nose which paired well with the charred vanilla and toffee flavours from the charred oak.