Craft Distilling with the Grainfather – Part 1 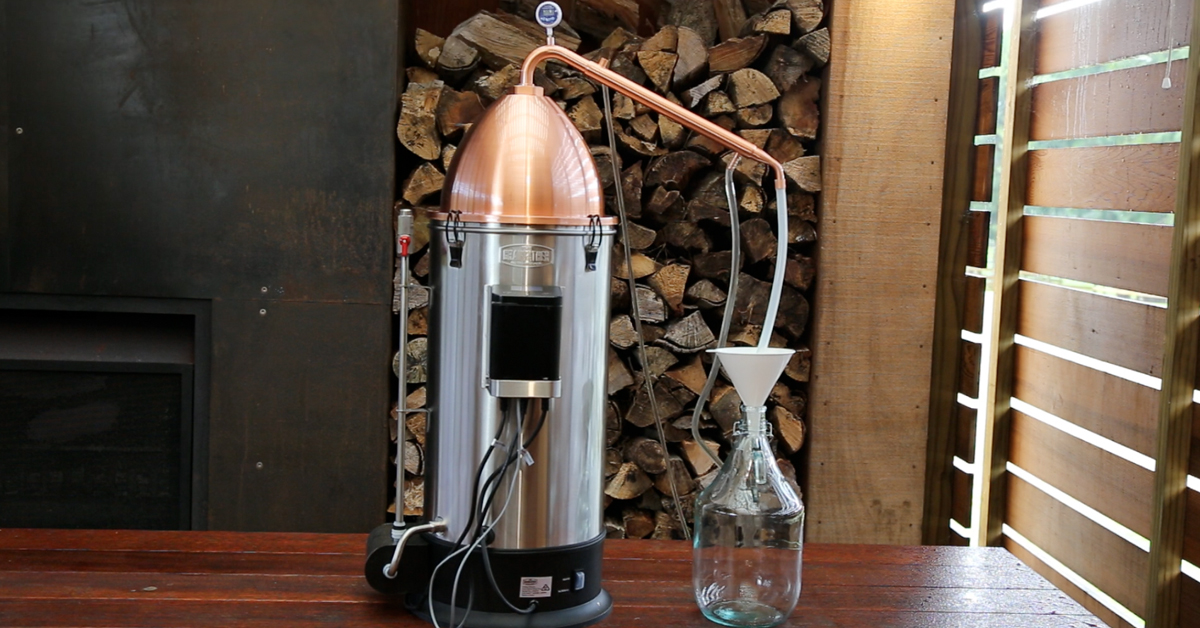 Alcohol distillation is at times viewed as the poor cousin to brewing beer. It has collected this stigma through regular and often hilarious references to ‘hillbillies’ and ‘moonshine’. Where the simple method of producing ‘ethanol’ is perhaps a tad underwhelming, distilling a craft spirit such as whiskey or rum can be just as involved, if not more.

As much as we are all hops heads, who doesn’t enjoy a seriously good whiskey made from malt? We are talking the real deal here, proper high quality spirits from real ingredients made the traditional way with your very own brewing system like the Grainfather. It’s super satisfying as a home brewer and you’ll be sure to enjoy adding another string to your bow…

The simple and very popular way of making alcohol is distilling a dextrose/sugar wash. The sugar wash when distilled (usually using a reflux still) creates plain, neutral alcohol that can then be flavoured at a later stage with commercial alcohol flavourings to give a similar flavour profile of the traditional spirit being imitated, e.g. rum flavouring.

However, with craft distilling, we are looking to create a traditional spirit brewed from their traditional source i.e. barley for whiskey, molasses for rum and grapes for brandy, with many other options as well). Where possible we would also be looking to handle the spirit after distillation traditionally, like aging whiskey on wood by either using barrels or wood chips.

Alcohol can be made by yeast from any simple sugar source. Sugars and syrups like dextrose, brown sugar, molasses and golden syrup are already simple enough that when diluted yeast will ferment these into alcohol. Grain products like barley, corn, rye and oats require modification of the starch into fermentable sugars before the yeast can work. The modification occurs by steeping these grains in warm water where the naturally occurring enzymes in these grains convert the starch into fermentable sugars. Other fruits and plants like grapes, potatoes and agave may require other processing before fermentation can occur.

The process of craft distilling for each type of spirit can be somewhat specific to that spirit. But they all can be simplified down to these basic steps;

For example, to make any whiskey from scratch, we will go through the following steps;

Distillation: is the process of separating one liquid from a mixture of liquids by the combination of boiling the mixture and condensing the mixture. In the case of alcoholic beverages, the process of separating alcohol produced by the fermentation from the wash is done selective boiling and condensing the wash under conditions specific to ethanol.

A Still: is the equipment used to distil liquid mixtures.  Commercial and home stills use the same technology and methodology as a laboratory distillation, but on an adjusted scale to suit the user. Stills are used for producing products like perfume, medicine, purify water and to produce distilled beverages containing ethanol (spirits).

A condenser: is a double walled pipe in which water flows through the outer pipe providing cooling to the alcoholic vapour from the boiling wash, which then condenses into a liquid in the inner pipe and flows into a collection vessel. In the home distilling world, the flow rate of the water passing through the condenser is used to control the temperature and the temperature controls which alcohol is condensed which for consumption is ethanol.

Pot/Alembic stills: are the most common type of stills used in craft distilling. By law cognac, Scottish and Irish whiskeys must be produced using a pot still to earn the name (Not only that, but by most accounts they also need to be produced in their place of origin). Pot and alembic stills are common for the production of any spirit where the flavour of the material used to make the wash is desired in the final product like cognac, Scottish and Irish whiskeys what utilise grain or when spices are infused in the spirit during the distillation process like gin and spiced rum. Pot/Alembic stills are characterised by the main boiler unit which boils the wash at the top of the boiler is an arm which has a condenser.

Reflux stills: are very similar to pot stills in that they have a boiler section which is designed to heat the wash in the same way as a pot still. Where they differ is the set up of the top of the still before the condenser. Reflux stills typically have a tall column at the top of the still that contain plates or some item that provides surface area in the column in the commercial side, in the home distilling versions stainless steel saddles provide the surface area.  The plates or saddles provide a surface in which the alcohol and water vapour can condense and fall back into the wash this act is called refluxing and greatly reduces the amounts of flavours that end up in the collection vessel. The result is a very neutral spirit that can then be further processed by adding flavours or re-distilling with botanicals. Because of the reflux action and the resulting neutrality of the spirit, the starting material and fermenting conditions for the wash are less important.

These Stills are typically made of stainless steel, copper or both. Stainless steel is cheap, easy to clean and durable however copper is a better conductor of heat and will also reduce any undesirable sulphur compounds in the distillate.