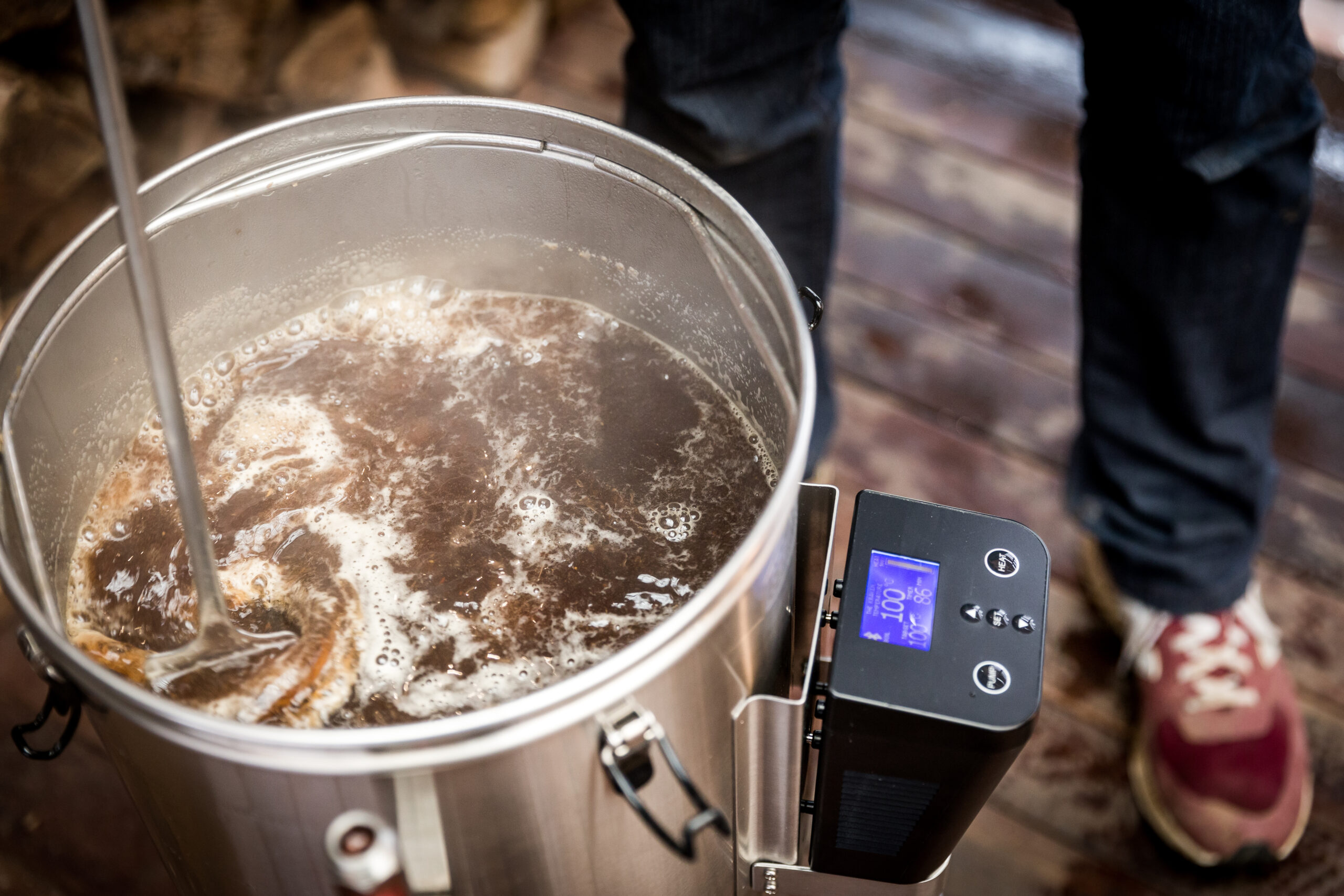 The Grainfather system is a very easy to use all grain brewing system that can achieve excellent results for even the novice brewery. Even so, there are key areas in which new and existing users can focus to fine tune their brewing with the Grainfather system and achieve even greater results. Our special guest David Heath provides some insight into these in part two of this segment.

Be aware that boiling points vary depending on your location. Altitude is the effect here. This effect can mean that your boiling point is lower than 100°C (212°F) due to the reduced air pressure. Adjustments for boiling point can be made within the Grainfather´s settings to account for this.

As you approach boiling point you will find that a foam has been forming on the top of the wort (it is not beer until you ferment it to add alcohol).

This is simply protein and it should be stirred in gently by using a brewing paddle. Once the top is clear it is normal to start you boil timer. Common practice is a 60-minute boil but for brews involving Pilsner malt a 90-minute boil is customary to avoid off flavours.

When adding additions to your boil it is important to stir them into the Grainfather to allow them to take immediate effect. In cases where you are adding sugars it is advisable to add the sugar to a small boil proof container with some of your wort added to allow the sugar to dissolve at least partially. Stirring will aid in this process. This can now be added directly to your Grainfather and stirred into the wort. In the case of candi sugar in crystal form it is important to stir these larger pieces on the bottom of the Grainfather to avoid burning on the bottom plate.

The Grainfather comes complete with a counter flow chiller. This device is very useful in cooling down your wort especially quickly so that you can add your yeast quickly. It is important to sanitise this before use. The advised method is to do this before the end of the boil by connecting it to your Grainfather and running boiling hot wort through it for a couple of minutes. Pause your boil timer while doing this. You will notice that you will lose some temperature during this time. After this is done wait for the temperature to go back up to boiling point before resuming the boil timer.

At the end of your boil it is best practice to use a whirlpool attachment on an electric drill to perform what is known as a whirlpool. The whirlpool will create a cone in the bottom middle of your Grainfather of hop and trub matter. By doing so this removes excess amounts from your pump filter ensuring easy cooling via the counter flow chiller. it also gives your wort a nice mix together, which is beneficial also.

When cooling it is important to note that the wort coming from the counter flow chiller will need to have its temperature measured, an accurate digital temperature meter is ideal for this purpose. The temperature of the wort still in the Grainfather unit is totally irrelevant at this point. Once the wort out has reached the desired pitching temperature of your yeast you will start transferring your wort into a fermentation vessel. Once you have all your wort transferred this is now time to use a wort aerator (like the new Grainfather Whirlpool and Aeration Brewing Paddle) to fully aerate your wort before pitching your yeast. This creates a perfectly healthy environment for your yeast to thrive in.

Fermentation is the main key to a successful end beer. There is an old saying that goes as follows, “Brewers make wort and yeast makes beer”.

Keys to a successful fermentation are as follows:

3)       Always use yeast nutrient in your brewing process

4)       Ensure a stable temperature during your fermentation that is within your specific yeasts temperature range. Lower temperatures in this range suit a better result for most styles. The greater temperature stability the better the outcome.

We hope you find this information both interesting and useful, it should provide you with a good starting point for quality brewing using the Grainfather system (or any system).

To further your knowledge, seek out further information in the form of Brewing books, magazines, videos including the large amount of growing content on the Grainfather website

After almost 30 years of brewing I am still learning new things from time to time myself.