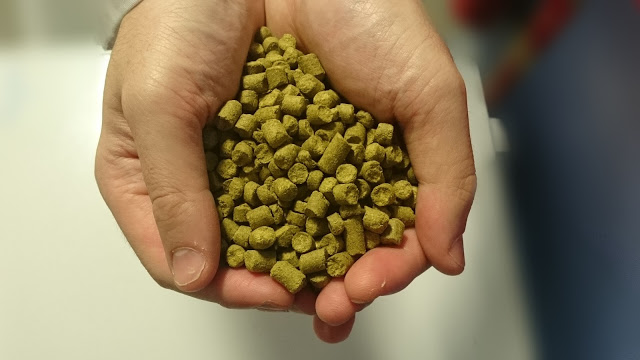 If you’ve been home brewing for any amount of time it’s likely you have come across the debate on whether whole hops or pellet hops are better for brewing with. Each offers their own distinct advantages and disadvantages. In today’s Weekly Mash, Dave from our UK office talks about the pros and cons of these hop forms as well as some others and brews a big, hoppy beer to demonstrate how to get the best utilisation with the Grainfather.

I’ve been using pellet hops since I started brewing as typically they have always been easier for me to get a hold of and I read early on that utilisation is greater with pellet hops (meaning you need less hops to do the same work).

However, on occasion when I haven’t been able to get hold of pellet hops I have used whole hops (also called leaf hops) and had good results with them. It might just be because I know I’ve used a different form of hops but I always feel as though the taste from whole hops is a little more subtle and smoother.

So what are ‘whole hops’ and ‘pellet hops’?

Whole hops (also called leaf hops) are dried, fresh hop cones. They are packed into large bales which are then broken down for reselling. Unlike pellet hops, whole hops do not have a protective layer created by ruptured lupulin glands which makes them much more perishable than other hop forms. Also, unlike pellet hops they are not homogenous, meaning sampling and bitterness control are difficult for the producers which means variable results for homebrewers, which can be a consideration if you are looking at making repeatable recipes. When using whole hops you should also expect 10-15% less utilisation than with pellet hops.

Many brewers enjoy using whole hops though as they feel they are more natural and provide a less harsh hop flavour to the beer. Sierra Nevada has been famous for their use of whole hops.

Pellet hops are hops which have had a lot of the vegetative material removed from the cone and are then milled in a hammer mill, reducing them to a powder, before being pushed through a pellet mill. This process ruptures the luplin glands of the hop which makes it easier to isomerise the alpha acids. This, combined with an increased surface area in contact with the beer, results in a higher utilisation percentage compared to whole hops.

In terms of disadvantages with hop pellets, hop aroma is very volatile and the process that pellets go through may have a negative effect on the aroma that pellets can provide and, whilst rupturing the lupulin glands, is useful in terms of efficiency. Some brewers claim that certain compounds in the hop are released too quickly as a result of this and so are not effectively absorbed into the beer.

Isohop extract is another option available to brewers. This is the hop resin components extracted from the original hops using liquid CO2. Hop extract can have an alpha acid content of up to 65%. Hops in this form are much more stable than any other form and can supposedly be stored for years at ambient temperatures with very little degrading. Utilisation is also massively increased and the alpha acids can be adjusted to exact specifications meaning batches can be very uniform.

I wanted to experiment with different hop forms and demonstrate how the hop utilisation should look when using the Grainfather. I decided to brew a hoppy pale ale, the recipe for which is up on our facebook page. This recipe utilises a good amount of hops in the boil and I was using a mix of pellet form Galaxy and whole form Ella. I threw in 8g of Galaxy at the start of the boil and then threw in 72g of Galaxy and 75g of Ella in at the end of the boil and let this stand for 20 minutes.

After 20 minutes I took my paddle and stirred the wort vigorously for 30 seconds to create a whirpool effect and draw the hops down and around the pump filter. 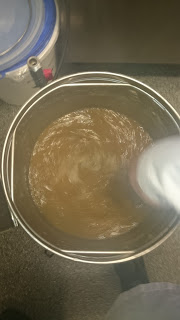 Then I attach the chiller and begin running the wort through to sterilise the inside. I do this for 5 minutes before I start the cold water. 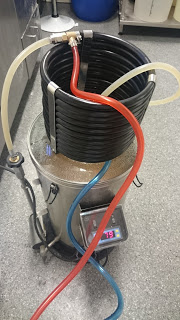 Once the cold water is running, I check the cold wort out hose. Once this is running cold I stop the pump and move the hose over to the fermenter before starting the pump up again. This ensures cold wort is running into my fermenter and prevents the pump becoming blocked or the wort taking a long time to chill which can both be side effects of running the cooled wort back into the boiler for too long.

Once the wort is fully collected in the fermenter you can see my hop trub looks like this: 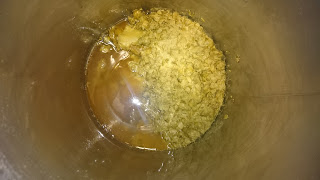 After carefully scooping out the whole hops you can see how the hop debris has compacted along the pump filter, creating a second layer of filtration:

Which can be seen better in the image below from a previous brew: 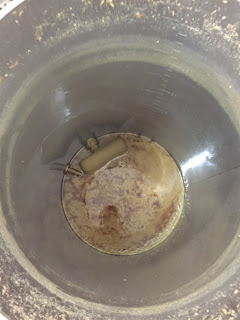 Creating the whirlpool effect with your paddle is vital for drawing the hops down and creating this natural filter layer over the pump filter, this will also improve the clarity of the wort coming out of the chiller. By ensuring you stir the wort well before starting your chilling and by not chilling the full amount of wort back into the boiler you can avoid the trub floating too loosely at the bottom of the boiler which can cause recirculation problems.

After 6 days the beer had dropped to 1.010 so I dry hopped with a mixture of whole and pellet hops and moved the beer to fridge for 3 days. When I eventually came to taste the beer, the hop character was huge. A really nice bitterness (I was aiming for a BU/GU ratio of 0.71) helped to balance the wonderfully juicy, grapefruit characteristics of both the hops used. I’m a huge fan of the Galaxy/Ella combo and this might be one of my favourite beers I have brewed.’