Making Whiskey with the Grainfather 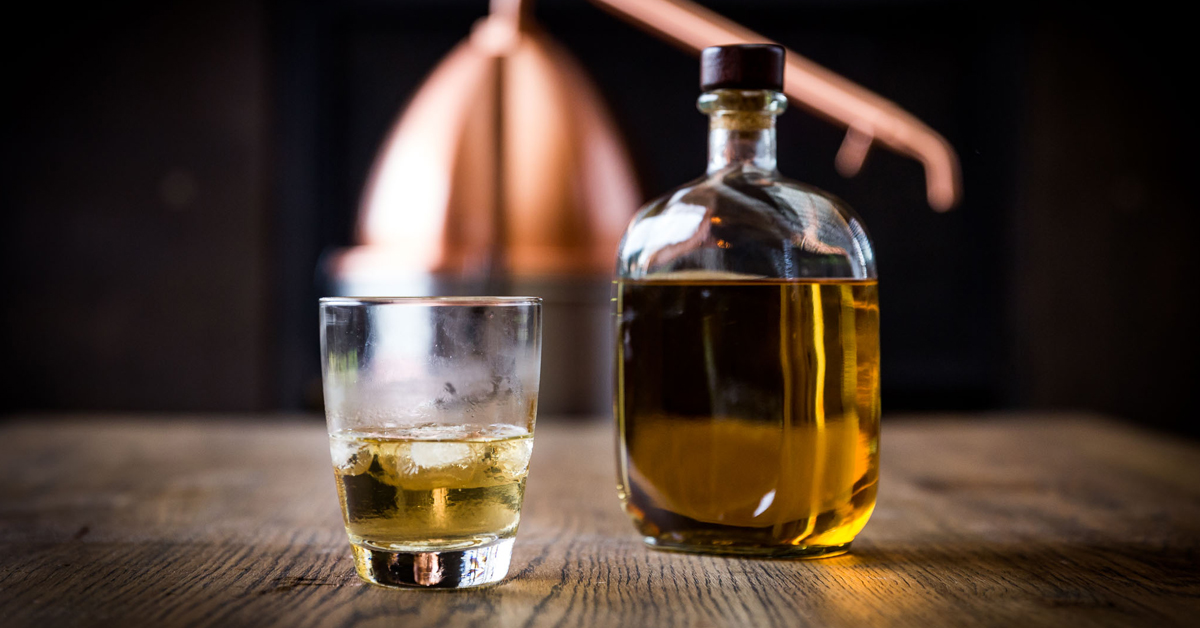 Your Grainfather is a wonderful all grain brewing system designed to create craft beer which we know you all love. But as much as we are all hops heads, who doesn’t enjoy a seriously good whiskey made from malt? We are talking the real deal here, proper high quality whiskey from grain. So guess what? That’s right you can make it, the traditional way with your very own Grainfather. It’s super satisfying and you’ll be sure to enjoy adding another string to your Grainfather’s bow, here’s how…

We can transform the Grainfather into a system suitable for producing whiskey from grain by simply adding the Alembic Pot Still Attachment. For those that don’t know, an Alembic Still is designed to retain and enhance flavours from your wash. While reflux condensing strips the flavour, the Alembic is used where the key is to let the flavours come through the distilate, which is exactly what we want when making whiskey.

Basically a simple and very popular way of making alcohol is distilling a dextrose/sugar wash. This creates plain, unflavoured alcohol that can be flavoured at a later stage with anything you like with spirit essences like from the Still Spirits range. But what we are looking to create is traditional whiskey brewed from grain, where we pick up and keep all those fantastic flavours. Similar goes for brandy from grapes and rum from molasses.

Let’s focus on Whiskey for now. To make any whiskey from scratch, we will go through the following steps;

There are many recipes that are available, each with a variety of grains that introduce different flavours to the whiskey profile. The method and stats below refer to our ‘Hard Mocha American Single Malt‘ Grainkit recipe which we’ll include in a link with this post. The below method is a simplified version to give you a run-down on the process involved.

Again, very similar to brewing beer we are looking at the fermentation process that will convert the sugars into alcohol. Cool the wort using your Grainfather’s Counter Flow Chiller, transfer into your fermenter, then pitch your yeast. Ferment at around 18-23°C (64-73°F) for 10-days. We are looking for a final gravity of 1.012. Finally we need to clear the wash and transfer back into the Grainfather to get ready for distillation.

For spirits such as whiskeys, rums and brandies, the flavours present in the wash contribute significantly to the flavour of the final spirit. Because of this a balance needs to be achieved between making a smooth-drinking spirit, and also one which has a nice flavour. Pot stills are a great way of achieving this and two distillations provides the perfect balance between obtaining a smooth drinking final product and also one which contains the fantastic flavours present in the wash. The first of these two distillations is referred to as the stripping run, and the second is called the spirit run.

The stripping runs main purpose is to get the alcohol out of your wash, and to strip of some off the harsher flavours from the wash, while the spirit run is for collecting the spirit.

Connect the Alembic Dome to the top of the Grainfather and the condensor arm to the water supply. The boiler will take time (roughly an hour) to get up to temperature depending on how cold it is where you live. Ethanol will start condensing at 78°C (172°F), so keep an eye on your thermometer. As the steam rises, it will start to reflux in the copper dome collecting the flavour from your beautiful brown wash. This is why the dome has it’s specific shape. From here the steam makes its way into the arm. This arm is a specific design called a Swan neck.

As the steam travels through the arm, it will reach the condenser. This is where cold water is connected and pumped around and tube that covers the steam tube. This will cool the steam, turning it into liquid state again. From here the liquid travels to the outlet and into a large collection vessel. We will collect all the distillate until the ABV drops to 20%. After a clean up it’s time to distil this again.

In this run you will be making your cuts. The flavour of the spirit will really come out nicely in this run, so let’s have a look at making cuts and why this is important. Cuts are the separate fractions that you collect during distillation. You will be making 3 cuts at each end of the process when distilling, of which the ‘heads’ and ‘tails’ will be collected in multiple 150 ml (5 US fl oz) containers. Turn on the Grainfather and set to boil for the whole distillation process. You will be reading the temperature off the Alembic Condenser Arm, not from the Connect Control Box. Once the temperature reaches 55°C (131°F) turn on the cold water.

TIP: One great feature of the Connect control box is being able to set the power level (check out the manual for details on this). Once the temperature starts to ramp up close to 70°C (heads start at around 78°C), change the power setting down to around 60%. This will slow down the rate of temperature increase and allow you to make your cuts at a slower pace, meaning you will have time to taste and collect without being rushed. As the temperature slowly rises you will reach each stage of cuts automatically.

The first cut is known as the heads. This is the first portion of spirit that will come out of the still. It will be very strong in ABV, around 80%. Between 78°C (172°F) and 80°C (176°F) a variety of compounds will come out of the still and you will be able to smell the harsher acetone notes in the heads. This is the fore-runnings. It is mostly a collection of chemicals that includes acetone, aldehydes and methanol. We will want to discard this (around 200 ml or 6.7 US fl oz) before continuing the next 3 heads cuts that we will keep in separate 150 ml (5 US fl oz) containers forblending later.

To make the heads cut you can rely on the temperature reading, but this will vary from wash to wash, so it is good to learn to taste when to make the cuts. It is important to make a proper heads fore-runnings cut, otherwise you will wake up the next morning with a headache like no other! When the temperature reaches around 84°C (183°F) the heads are finished.

The second cut is known as the hearts. This is where the flavours of the spirit will really come through nicely. The ABV will be lower than the heads, so you will be able to taste some of those nice flavour tones coming through in your spirit. The hearts will make up most of the volume that you will be collecting so you will need a larger container/demijohn roughly 5 L (1.3 Us Gal). Once the temperature is around 93°C (199°F) the hearts are finished.

The last cut is the Tails. At this stage the ABV will be getting quite low, and some strange flavours will start coming through. Often these flavours are related to vegetables and acidic tastes. When making your tails cut, keep the tails as you can use this in your next distillation run to add some more alcohol into the wash. Collect these like the heads in 3 smaller containers. Continue collecting the last of the tails in a larger container until the temperature is around 98°C (208°F) or the ABV is 20%.

The reason you have collected the heads and tails in small samples is that not all the heads and tails will be good to mix with the hearts. You will need to taste each sample set and decide which you like the best to add to the hearts mix. Work your way through tasting and smelling each and add what you want to the hearts, but you don’t have to add the entire container if you want a mix of a few.

As a rule of thumb the heads generally add contain slightly hasher flavours but contain more ethanol, while the tails are the opposite containing generally pleasing flavours.

Add any samples that you are not happy with to the second large container that contains the final part of the tails. This is called the ‘feints’. We don’t really want to drink this, but it’s great to add to your stripping run when making your next batch of whiskey!

Ageing (remember patience is a virtue!)

Dilute the final you have just mixed down to 50% ABV with filtered or distilled water. What you may not know reading this is that the whiskey alcohol collected is clear in colour! No it’s not the delicious brown synonymous with whiskey, that is the job of the oak barrel, or in our case an oak spiral which we will now add to the spirit. Flavour and colour will be extracted from this oak over 2 weeks and it will start to resemble a classic whiskey to the eye. Feel free to taste the whiskey during this phase and remove the oak spiral if you’re happy with the flavour.

The whiskey can be ready in 2 months, but the more heads and tails added then the longer it will need to age properly.

There you have it, whiskey from your Grainfather! Brewed from grain and distilled using the Alembic Pot Still attachement. This is seriously good whiskey too as you will find out!