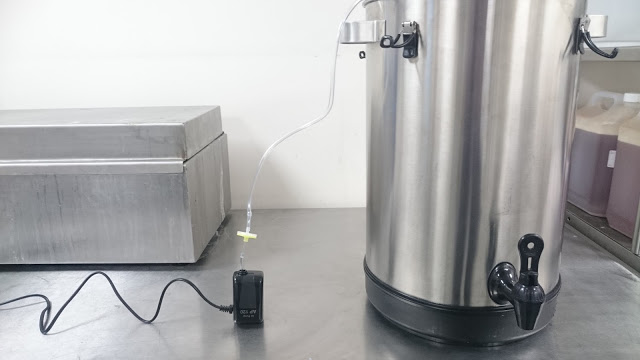 Brewers yeast is what is known as a faculative anaerobe which means it is able to grow under both aerobic and anaerobic conditions. In fact, yeast grows maximally under aerobic conditions (meaning, in the presence of oxygen). However, wort fermentation (which we’re concerned with as brewers) is largely carried out anaerobically.

When it comes to brewing there are actually only three points where the introduction of oxygen is beneficial;

When yeast is first pitched into wort, some oxygen must be made available to the yeast but apart from this, oxygen should be excluded due to the fact it promotes flavour instability.
So, if yeast is capable of growing without oxygen present and the presence of oxygen can actually be detrimental to your beer, why introduce oxygen at all?
Well, there are actually several reasons oxygen is required in the wort at the pitching stage;
So for the purpose of brewing, molecular oxygen is required as it is taken up by yeast and used in order to synthesise sterols and unsaturated fatty acids which are essential components of the yeast membrane and required for growth. This all takes place within 3-9 hours, after which time oxygen is unlikely to be present in pitched wort.
We caught up with Dave from our UK team to talk us through the methods available to homebrewers for introducing oxygen to their wort.
“Oxygen is an extremely important (but often overlooked) component of your wort and vital for creating good beer. There are several methods we can use to introduce oxygen to our wort, varying in results, repeatability and cost.
The first method is simply ‘splashing’ the wort. As you transfer the wort from your kettle to your fermenter be sure to splash the wort to introduce oxygen. With the Grainfather this can be done by holding the cold wort out hose (making sure you sanitise your hands) and shaking it as wort flows into the fermenter. You could also place a clean and sanitised sieve over the fermenter or sanitise two vessels and transfer between the two several times. Obviously this is cheap and relatively easy but gives you no control and obviously, the more items you introduce your cold wort to the more you increase your chance of an unwanted infection.
Similarly, rather than splash the wort as it enters the fermenting vessel, you can agitate the vessel once the wort is collected. This simply means shaking your fermenter or carboy or using a whisk or drill attachment to aerate the wort in the fermenter. Again, it’s an easy way for homebrewers to introduce oxygen to their beer but there’s nothing precise about it.
Thirdly, you can use an ‘oxygen stone’. This is essentially a diffuser which you place in your beer and then use a pump and tubing to force oxygen into the wort. This works well to create a stream of small oxygen bubbles which will dissolve more efficiently into the wort. This method gives you a little bit more control over the process and is more efficient than splashing or agitation.
Many homebrewers will also use tanks of pure oxygen with a diffuser (rather than an air pump). This is much more effective than relying on air, as oxygen only makes a small percentage of air (21%). This is probably the most controlled method of introducing oxygen to your beer short of an inline oxygen injection between the chiller and the fermenter, though this may be beyond the scope of the average homebrewer.
Other interesting aspects to look at (and possible experiments for the future) include the use of yeast hulls or ‘yeast ghosts’ to provide nutrients, detoxify the environment for the remaining yeast and provide unsaturated fatty acids and amino acids – potentially allowing the yeast to grow under anaerobic conditions. You could attempt to add a packet of yeast to your wort in the last 10 minutes of the boil, effectively killing the yeast but keeping their nutrient stores available for the yeast you pitch into your cooled wort.
Lastly, some brewers have recommended olive oil as a viable alternative to oxygenating with the idea being that olive oil is a cheap and readily available source of unsaturated fatty acids. The benefit obviously is that if you don’t have to aerate your wort you improve the long term shelf life of the beer. Though, testing of olive oil in place of oxygen has shown that there is an impact on fermentation time, which will be slower, and ester production, which will be higher. If you do want to try this out for yourself aim for ~5mg per 23 L (5 US Gal) batch.”
What methods have you tried for aerating your wort and what were your results? Let us know at [email protected]