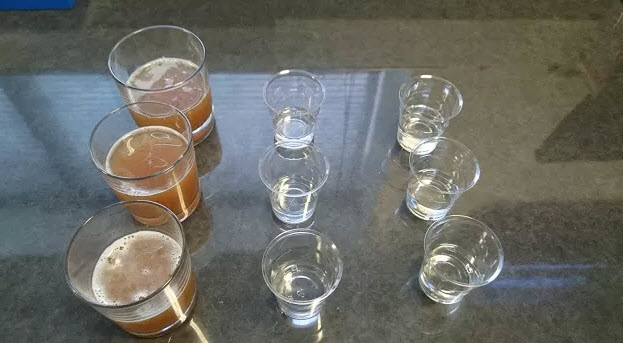 This week Dave from our UK office has written up his experiences of doing his very first distillation, making a spirit from a super hoppy craft beer no less! Read below to find out what he did and how the spirit came out.

I’ve been reading a lot recently about craft breweries, such as 3 Floyds, branching out in to distilling and after discovering the Urban Distillery (based in Madrid) who make vodka from craft beer I decided it was time to have a go for myself. According to the Urban Distillery the vodka has the taste of cereal, white chocolate, hops and citrus but after reading online about distilling from beer, the majority of opinion is that distilling would eliminate any beer flavour.

I, therefore, decided that if there was any chance of preserving the flavour through the distilling process, the original beer was going to have to start out big and full of flavour so I went with the following recipe;

Mash at 64°C for 60 minutes, boil for 60 minutes. The beer fermented rapidly, going from 1.058 to 1.009 in three days so I missed my usual dry-hopping window (I like to add them when the beer hits around 1.020). On Day 3 I added all 150g of my dry hops and left the beer over the weekend, by Monday the beer had finished at 1.008 so I was ready to distil. First I filtered out the hop particles in the beer, as they would create nucleation points during boiling and would isomerise making the spirit super bitter.

Next, I degassed the beer, by pouring the beer repeatedly between two buckets, after this, I poured the beer into the boiler (I bottled a small amount to test against the finished spirit) getting 15 L of 6.5% beer to distil.

I started the distillation process after attaching the Alembic Pot Still Attachments to the Grainfather. The process was remarkably easy, I simply ran my cold water around the top of the still whilst boiling the beer in the boiler. As the alcohol evaporated and condensed in the cold top I collected the runnings (collecting and discarding the first 100ml in a measuring cylinder so that I could get rid of the impurities, and the rest in a large 5 L flask).

Overall I collected 2.5 L of 33% alcohol in my first runnings. The smell was incredible, I was shocked by just how much of the hop aroma came through in the spirit. I was convinced that this would have all been stripped out by the distillation process. I gathered two small bottles of the first run spirit and poured the rest into a jerry can, ready to distil for a second time. I was interested to compare the two runs to see how much of the beer character would transfer after a second distillation.

For my second run, I poured 2.2 L of my spirit back into the boiler and topped up to 25 L with water before beginning the distillation process again. At the end of the second run, I had collected 1.1 L at 40%.

After giving the beer two weeks in the bottle to carbonate we were ready to taste the spirits against the original beer.

The beer was insanely hoppy, bitter and floral, it tasted almost like Ruination by Stone, although a little less drinkable and with a lot of hop haze. I wasn’t too disappointed as the aim of the beer was to be hoppy enough to carry the flavour through the distillation process. The first running at 33% had mellowed a little from when I tasted it out of the still. The smell was strong oak and ash, with a smoky character coming through in the taste and a fairly rough finish. The beer character had definitely carried across though.

For the second running, the taste was considerably smoother. There was still a nice smoky characteristic which I was surprised about as this wasn’t present in the beer. The aroma was much more floral and the spirit tasted sweeter. All tasters agreed that this was much more interesting than a standard spirit and would make a great ‘sipping whiskey’. We even came up with the idea of using the spirit as a bomb in a strong beer. I’ll update with how that goes.” – Dave