New England IPA – What Is It? 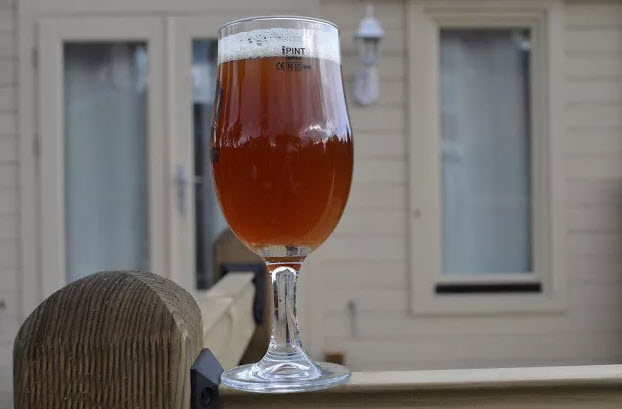 Controversy in the craft beer world is nothing new and as more and more articles crop up about describing a hazy, juicy ‘new’ style of IPA lines are being drawn between those people who are completely in love with the flavour of these beers and those who just can’t bring themselves to get past the definition. Dave from our UK office takes a look into the brewing techniques of the ‘New England’ IPA and the debate around whether or not this truly is a style;

Beer lovers enjoy a good argument it seems – whether it’s taking sides in legal battles over beer names or trying to define ‘new styles’ of beer, it appears that when we’re not drinking beer we’re fighting about it.

One of the biggest, recent examples of this was the whole Black IPA/Cascadian Dark Ale/Hoppy Stout debacle from a few years back. Whilst half the craft beer-loving world was arguing over whether or not this was even a style, the other half were arguing about what to call it. For what it’s worth, I was taught by James Kemp (currently head brewer at Marble Brewery in Manchester) that a real black IPA should look like a dark stout but when you close your eyes and drink it you should taste an IPA and that is always what I look for in a good example of the style. Extremely subtle roast flavours, maximum hop aroma and flavour – nothing like a stout other than in appearance. Now it seems the whole argument is kicking off again. Google ‘New England IPA’ and you will find a whole lot of articles from midway through last year until now with great titles that include phrases like ‘not a thing’, ‘controversial’ or just, ‘how do I make one?’ Which perfectly illustrates the differences in opinions.

In this great article, Ezra Johnson-Greenough talks to several of the brewers credited with creating the style and it makes for interesting reading that none of the brewers actually recognise their beer as a new ‘style’ or even deliberately set out to make a new beer. What I find unfair is the claim made that ‘Beer geeks, homebrewers, and writers have become obsessed with this one feature of the beers that seems to be an unintentional side effect of the yeast and dry hopping that has become accentuated by offshoots inspired by the originals’. Maybe to some, it is the ‘haze’ that is desirable but I think most homebrewers I know who have tried this style are talented enough that they realise the ‘haze’ is just a result of techniques employed to maximise flavour and it is the flavour that they are ‘obsessed’ with, not just trying to make hazy beer for the sake of it.

So what seems to be the characteristics and techniques of these New England IPAs?

Obviously, this is first and foremost an IPA so great, hop-forward character goes without saying. Most supporters of the style say that this should have a more subtle bitterness than a standard American IPA and should showcase more ‘fruit juice’ hop varieties than the citrus and pine flavours that we typically expect from IPAs. Hop varieties like Galaxy, Ella, Citra, Equinox are typical and they are used in large quantities because (as we will look at later) the way in which these beers are made can slightly dampen hop aroma but give that desired ‘juicy’ character.

This style utilises a lot of whirlpool hopping and dry hopping. For those unfamiliar with the whirlpool hopping technique, this method involves focusing on grams per litre of hops rather than the IBU of the beer. You should use somewhere between 2-10g/L depending on your target original gravity (so for beers starting around 1.050, 5g/L is a good starting point). Rather than add a large bittering charge at the start of the boil and then adding aroma and flavour hops at intervals throughout the boil, you will be adding your 5g/L at 0 minutes (so as soon as you stop the boil). Between 79-100°C the alpha acids in hops are still isomerising so you will still get some bitterness from this addition as it sits in the wort whilst it cools. Normally you can expect utilisation of between 3 and 5% so you can work out what IBU contribution you will get from there.

At this point, you can work out the remaining bittering hop addition needed to reach the IBU for the style. What this technique does is provide a much more subtle, well-rounded bitterness whilst also imparting big flavour and aroma because less of the volatile compounds are being boiled off.

When it comes to dry hopping it’s another opportunity to go big. Dry hopping whilst there is still some active fermentation going on is good practice as the movement created in the wort diffuses hop compounds into the beer. Dry hopping when your beer reaches around 1.020 and then leaving the hops in contact for three days works well but many brewers develop their own techniques for dry hopping so feel free to experiment. Fresh hops are incredibly important, this style is made to be drunk young, so the fresher the better, and look for hops with high oil contents, particularly myrcene and aroma compounds linalool and geraniol.

Yeast is a big influence on these beers. Unlike a lot of American style IPAs that have been produced, the New England variety does not use neutral American yeast strains but instead tends to favour slightly less flocculent, slightly more fruity English strains.

Flocculent yeast strains can strip hop aroma so theoretically, using a less flocculent strain leaves hop oils in suspension and can therefore lead to improved flavour in the end beer. Combine with this, dry hopping has been proven to have a negative effect on flocculation so the already less flocculent strain and huge dry hopping levels, can lead to a beer with a lot of yeast in suspension.

American style IPAs would typically contain a small amount of crystal/caramel malts in the grain bill (usually around 5% of the grist). This would help to counteract the aggressive dry-hopping that is characteristic in most American IPAs, a technique that can strip out body from the final beer. The dextrinous malt would help to increase the body of the beer, which in turn would improve the beers ability to carry the hop character.

New England IPAs tend to be less reliant on crystal malts though, so how do brewers keep the body of the beer? A combination of less attenuative yeast leaving more sugar and residual sweetness in the beer, wheat and oat malts which provide proteins that give body to the beer and higher mash temperatures.

Typically in an IPA, you are looking for a dry to medium-dry character with a medium/high to very high hop bitterness. This is done by adjusting the sulphates to chlorides ratio. Sulphates help to produce a fuller, drier flavour, accentuating hop character whilst chlorides help improve palate fullness and increase the perception of sweetness/mellowness which accentuates malt character in beers.

Many brewers believe that the ratio in which these ions are present in your water has more effect on the end beer then the actual ‘quantity’ of these ions. So if your chloride to sulfate ratio is 1:5 your beer will be incredibly hoppy with minimal malt character. This is an extreme example though as 1:5 is most likely too hoppy for most drinkers – even hop bombs need some element of balance!

Conversely, if you increase the chloride concentration you can increase the perceived sweetness which is linked to the ‘pillowy’, ‘juicy’ mouthfeel that fans of these IPAs are trying to achieve.

Putting it all together

So to brew this beer successfully, what are we looking to achieve? Well, this is not a recognised style so there are no guidelines but based on what people are brewing, the parameters should look something like this;

Overall Impression
Less bitter than a standard American IPA, the balance is still hop forward but focussed more on aroma and flavour than bitterness – in particular, grapefruit and orange aromas and flavours. More yeast character is allowable but this should focus on ‘fruity’ esters. Mouthfeel is key to the style and should be soft, ‘pillowy’ and reminiscent of drinking fruit juice.

Aroma
Intense hop aroma, less focused on spicy, pine characteristics and leaning much more towards tropical fruit and citrus. Many versions are dry hopped and fresh hop character is key to the style. Grassiness should be avoided and is acceptable only at very low levels. Fruitiness from yeast may be detected. A restrained alcohol note may be present, but this character should be minimal at best. New World and American hops are still the most acceptable varieties.

Appearance
High wheat and oat content, less flocculent yeast strains and aggressive hopping rates make this beer extremely turbid. True representations are extremely cloudy/hazy which seems to contribute towards the mouthfeel. To many brewers used to clarity being an indication of quality and best brewing practices, these beers can appear muddy. Some brewers choose to add wheat flour in the mash to add to the murkiness of the end beer and most will avoid adding fining agents at any stage of the brewing process. Head should be medium to large, white/off white with good retention.

The appearance of these beers is a direct result of techniques employed to get a certain characteristic in the beer. Aroma, flavour and mouthfeel are the most important aspects to get right and the appearance, whilst seeming to be the defining feature of this style, should not be an end goal in itself.

Flavour
Hop flavour is medium to very high and should reflect an American or New World hop character, such as citrus, floral, pine, resinous, spicy, tropical fruit, stone fruit, berry, melon, etc. Medium hop bitterness should be well balanced. Malt flavour should be low to medium-low and is generally clean and grainy-malty although some light caramel flavours are acceptable. Yeast-derived fruitiness is acceptable. Medium sweet finish; residual sweetness should contribute to a ‘fruit juice’ perception and should enhance the hop flavour. The bitterness and hop flavour may linger into the aftertaste but should not be harsh. A very light, clean alcohol flavour may be noted in stronger versions.

Mouthfeel
Medium body, with a smooth texture. Medium to medium/high carbonation. No harsh hop derived astringency. Very light, smooth alcohol warming – not a fault if it does not intrude into overall balance. The body should be full and ‘mouthcoating’ should be perceived. These beers are typically described as ‘soft’ and ‘pillowy’

Comments
A culmination of various existing techniques used in IPA brewing to enhance hop flavour. A natural evolution from the ‘extremely bitter’ American IPAs that were popular several years ago, rather than focussing on bitterness this variant puts flavour and mouthfeel at the forefront.