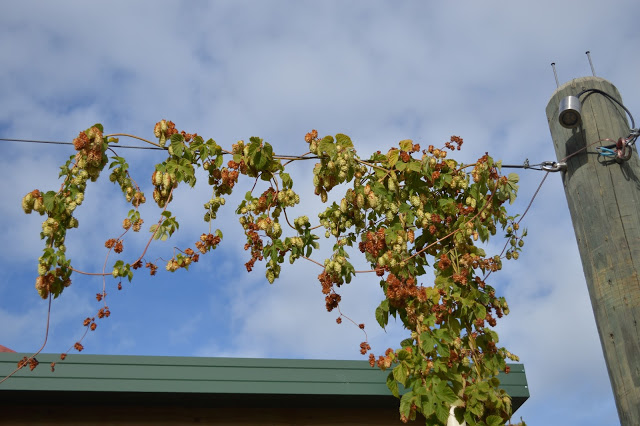 This week, Dave from our UK office had the chance to visit us here in New Zealand to attend MarchFest beer festival and the first New Zealand Homebrewers Conference. Inspired by being in Nelson, the hop capital of New Zealand, Dave has written this Weekly Mash on the history of hops in New Zealand and some of his favourite varieties from the country!

New Zealand is fast becoming a real competitor in the global craft brewing market, led by some fantastically innovative breweries and further helped by easy access to some of the best hop varieties in the world. I was lucky enough to have the opportunity to go to the home of New Zealand hop farming and learn more about the history of growing hops.
It was early immigrants to Nelson, coming from southern England and Germany who brought hop seedlings with them. They found that the weather conditions were ideal for growing hops – warm summers, regular rainfall and a relative lack of wind all making for great hops.
When the Califonian ‘cluster’ variety made its way to Nelson in the 1920s it thrived even more so than the European varieties, providing hop farmers with far greater yields and soon became the dominant hop variety in the region. However, from the 1920s to the 1960s New Zealand’s dominant hop cultivar suffered from a disease called ‘black root rot’ which caused a high incidence of plant deaths. The disease became so severe that in the late 1940s brewers and growers asked the DSIR (Department of Scientific and Industrial Research) to undertake research to develop resistant hop cultivars. Consequently the hop research station was established at Riwaka in 1949.
The Californian cluster variety was crossed with varieties known to be resistant to disease and in the 1960s three new varieties were released; Smoothcone, First Choice and Calicross. Modern varieties such as Pacific Gem and Nelson Sauvin are derived from Smoothcone and Pacific Jade was developed from First Choice. New Zealand hops are in great demand now, in part as a result of their excellent resistance to disease.
New Zealand also took a unique route to developing ‘seedless’ hop varieties. Whilst most of the rest of the hop growing world opted for removing male hop plants from farms, New Zealand developed ‘multi chromosomal’ plants which produce seedless fruit whilst retaining the aroma and flavour profile of the parent.
80% of New Zealand’s hops are exported. In 2008 New Zealand hop exports made up less than 1% of the world’s hop harvest but were worth around $16 million NZD to New Zealand.
Some of the stand out varieties include;
Motueka – 6.5-7.5% Alpha Acids – Some ‘noble’ characteristics with citrus and fruity notes it is a cross between Saaz and a New Zealand breeding selection. It is a lively hop variety with notes of lemon and lime.
Nelson Sauvin – 12-13% Alpha Acids – It has a unique fruity, white wine characteristic and has become a favourite amongst many brewers.
Pacific Gem – 13-15% Alpha Acids – with a pleasant blackberry aroma it was bred as a cross between New Zealand Smoothcone and Cluster/Fuggle – well balanced and pleasant for a high alpha hop.
Pacific Jade – 12-14% Alpha Acids – herbal, citrus and black pepper aromas
Rakau – 9-11% Alpha Acids – Some citrus notes, peach/passionfruit/apricot
Riwaka – 4.5-6.5% Alpha Acids – A fantastic aroma hop, this will impart strong grapefruit and citrus flavours
Waimea – 16-19% Alpha Acids – Citrus fruit and pine needle. Despite its high alpha acid this is a good hop variety for both early and late additions.
Wakatu – 6.5-8.5% Alpha Acids – Zesty and floral this hop receives its name from an incorrect spelling of the Maori name for Nelson, Whakatu .
For a super simple recipe that showcases the best aspects of New Zealand hop varieties, try this New Zealand pale ale;
4.8kg Maris Otter
0.22kg Caramalt
0.22kg Carapils
0.19kg Vienna
Bittering addition at 60 minutes (bitter to 21.6 IBUs)
35g Motueka at 5 minutes
35g Nelson Sauvin at 5 minutes
35g Pacific Jade at 5 minutes
(Allow to stand for 20 minutes before chilling)
33g Motueka at Dry hop
33g Nelson Sauvin at Dry hop
33g Pacific Jade at Dry hop