Home › Articles › The Effect of Hop Aroma on Perceived Bitterness

The Effect of Hop Aroma on Perceived Bitterness

Dave from our UK office has been experimenting on this interesting factor of sensory perception.

‘As hoppy ale brewers begin to focus less on intense hop bitterness and more on increased hop aroma and flavour I have become very interested in the idea that increasing the level of hop aroma in a beer can also increase the drinkers perception of bitterness.

If this is correct then getting the balance you want between bitterness and aroma becomes slightly more complex – not simply a case of loading your hop additions to the end of the boil and dry hop but also considering how much aroma the beer can carry without the bitterness perception increasing to unwanted levels.

I decided to test this out by taking a beer that I had calculated to have an IBU of 55.5 and a BU/GU of 0.83 and adding dry hops in various levels before asking tasters to try the beers and identify the one they felt was the most bitter. 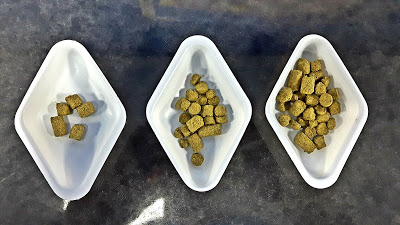 I then asked tasters to try the beer and tell me if they felt there was any difference in bitterness through the three samples, if so which beer they felt was most bitter and to then repeat the test with their nose pegged.

There were a few interesting qualifications to the results, with most tasters saying that without smelling the beer first they found it very difficult to differentiate between the three samples and you’ll notice that all the tasters who perceived a change in bitterness went with their first choice for which beer was most bitter when not using their nose so possibly these second lot of results were skewed slightly.

What I found really interesting was that without isomerising the alpha acids, the addition of hops should have no effect on bitterness and although it doesn’t change the IBU’s of the beer it seems that increased hop aroma does affect the perceived bitterness in most cases.

Definitely something to experiment on further and to consider when making your next hoppy beer!’

What are your thoughts on the links between hop aroma and perceived bitterness? Have you noticed it in your own beers that you weren’t expecting to be as bitter as they turned out?