Why Do Hops Taste So Good? 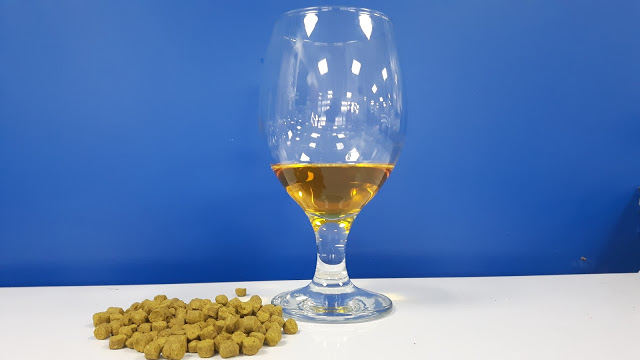 It’s safe to say that hops are a pretty popular ingredient for flavouring beer. By carefully selecting a single variety or combining multiple varieties brewers can get a whole range of interesting flavours such as pine, spice, floral, citrus or fruity.

But what is it about hops that imparts these flavours?

Hops are actually full of delicate oils, each of which helps to create different flavours in the finished beer. In this week’s Weekly Mash, we look at these oils and their effects on flavour and explain why hops taste so good.

Hop oils are created when the plant is flowering and are made up of compounds called terpenes. Myrcene for example is a monoterpene which can make up 70% of the total essential oils in the hop. Humulene and Caryophyllene are sesquiterpenes and make up the next largest proportion of the essential oils.

Also found in basil and cloves, humulene can be as high as 40% of the total hop oil content and is linked to a ‘spicy’ flavour in beer.

Unlike humulene, myrcene has a relatively low resistance to heat. This oil makes up the majority of the essential oils in the hops and can impart orange and citrus like aroma and flavour as well as earthy flavours. To get the most from the flavour, high myrcene hops are typically used at the end of the boil or in a hop stand.

A pepper and earthy flavour in beer but also some citrus flavour, caryophyllene can also be found in cloves. This compound is found in significant quantities in English hops such as Goldings.

Largely credited for  fruity/floral and citrus characteristics and distinctly ‘hoppy’ flavour, structurally linalool is similar to myrcene and displays similar properties A very delicate compound which can be driven off quickly throughout the boil. There is evidence that linalool also plays a role in increasing the stability of a beer during ageing (partially counter intuitive to the idea that ‘hoppy’ beers don’t age well). There is also evidence that some yeast strains are able to break down the glycosides of hops – for example geraniol can be broken down to linalool meaning linalool levels can increase during fermentation.

Can impart floral, rose like flavours in the end beer. Citra is a hop variety with a particularly high geraniol content. Interestingly researchers split a beer with Citra and coriander seeds which are also high in geraniol and an independent tasting panel found the beers ‘relatively similar‘. Geraniol can be metabolised by yeast to produce citranellol which is an important contributor to floral flavours in a finished beer – this is known as biotransformation.

Also found in lemongrass as well as hops, nerol is considered to have a fresher, rose-like character than geraniol.

Often cited as imparting a citrus and lemon flavour to beer.

Farnesene occurs naturally in fruits such as oranges, grapefruits and mandarins. One of the smallest of the hop oils in terms of quantity, farnesene oxidises quickly so fresh hops used post boil or for dry hopping are best.

What’s important to keep in mind is that you shouldn’t look at hop oil content and assume that a hop with a high level of a certain oil will immediately give you that rose petal/marmalade/orange peel flavour that you are looking for. The actual flavour contribution of hops is much more complicated and can be affected by the yeast strain used, the addition time of the hop, fermentation environment and interaction with other hop varieties used, among other things. You shouldn’t, as a brewer, assume that a specific hop oil will impart a specific flavour.

Biotransformation and the effect of active fermentation on hop aroma compounds is becoming an increasingly important area of study for brewers and ingredients manufacturers and it would be great to see homebrewers leading the charge!