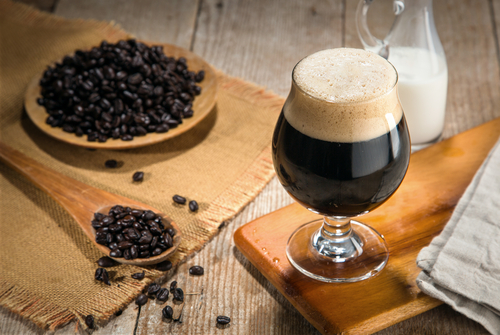 This week, Dave talks us through the techniques he has tried and tested for adding coffee flavour to beer;

‘One of my favourite beers and the one that really got me into ‘craft’ beer is Founders Breakfast Stout – an extremely complex yet beautifully balanced stout, full of rich dark chocolates and roast malt character. Most prominently though is an intense shot of coffee which comes from Sumatra and Kona coffee and elevates this beer to something truly special.

It’s this beer that has largely been my inspiration for my own coffee infused beers, which for the most part have been limited to stouts, dark beers which naturally have the roasted and bitter flavours which work so well with coffee.

It was another beer, this time a home brewed coffee lager, that first got me thinking about how coffee could work in lighter beers. It’s quite a surprising element in a pale beer, nothing in the appearance would hint coffee and I quite like that. It can be satisfying to surprise the people who drink your beer with something they didn’t expect, as long as it works well in the beer.

And the answer I’ve found to most of these questions is, ‘it depends’. It really depends on what effect you are trying to achieve and what you have available to you. Hopefully by looking at the different considerations individually I can help when you come to make your decisions.

What style of beer should I make?

I think for most brewers it is natural when you decide to use coffee as an adjunct to automatically decide on a stout as the most suitable style of beer. Commercially, coffee stouts are widely available and well received. The flavours that typically occur in a stout such as; dark chocolate, roasted grain, some dark fruit and nuttiness all combine well with coffee, which is another flavour that can be produced in stouts from the malt bill (before the brewer even adds coffee!).

Due to the complexity in flavours that are produced in a good stout there are a lot of flavour elements, and using an adjunct that compliments one or more of those elements can work really well so if you’re new to using coffee then stout can be a great choice as it is easy to get right.

If you are looking for something a bit more challenging and a little unusual then you should consider adding coffee to something pale. Done well, this can be a brilliant blurring of styles that confuses and delights the drinker simultaneously – part of the reason I’m so fond of a well brewed Black IPA.

Coffee beans contain oils which add a thickness and mouthfeel to your beer but can negatively affect head retention. Coffee will also contribute some bitterness to your beer so it is important to factor these things in to your recipe. A coffee wheat beer may not look like it should if the fluffy, white head doesn’t form properly or an IPA might fall out of balance if you don’t account for the added bitterness of coffee. That’s not to say don’t try these style if you want – just be aware of the possible outcomes from using your ingredients. Lagers or Pilsners work well with coffee but their delicate flavour profiles make it easy to overdo it.

What type of coffee should I use?

Coffee is a fun ingredient because there are so many varieties, not just options like espresso or the Sumatra and Kona blend mentioned earlier but also flavoured coffees and gourmet coffees. Coffee can even have fruit flavour characteristics which can add an interesting element to your beer. If you have the time and the inclination, brew yourself a coffee using the blend you plan on using to get a sense of the flavour contribution you can expect. It’s best to do this before you settle on a beer style as you may find your decision of what to brew is affected by the flavours from the adjunct you’re using. 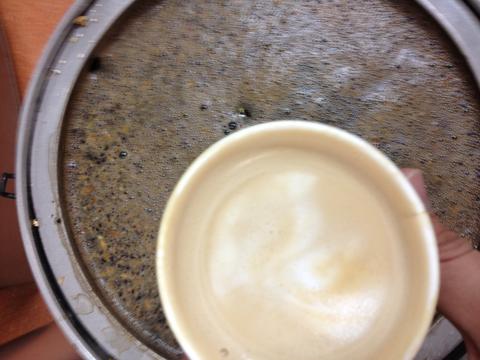 How do I add the coffee?

Again you have options here. The easiest way is probably (and I hate this phrase) ‘dry beaning’ which is very similar to dry hopping in that you are going to add coffee beans directly to the fermenter. Putting the beans into a hop bag will help with racking the beer later. This is a good option because it’s easy and effective, though it is probably not the most efficient way to add coffee flavour. Make sure you use sanitised equipment to take samples of the beer at regular intervals so you can remove the beans or rack the beer once the flavour is at your desired level.

Another option is to brew coffee as normal before allowing it to cool and then adding this to the fermenter, either during fermentation or just prior to packaging. Hot water is an effective method of extracting flavour from the coffee beans but can extract harsh bitter flavours that can be overpowering in your finished beer.

To avoid this, many brewers will cold steep their coffee which involves just soaking your coffee beans in room temperature water for 24-48 hours to extract the coffee flavour. The water is then added to the beer. This is a good way to extract coffee flavour and means you don’t have to worry about getting beans out of the fermenter or worry about the bitterness extraction from making coffee with hot water.

You may also decide to add coffee to the boil but I’d be wary of this as again you are going to extract harsh bitterness and most likely drive off a lot of the flavour compounds that you actually want in your finished beer.

And my final tip on this is something learnt from personal experience. Adding ground, instant coffee directly to the fermenter is a surefire way to ruin your beer. Filtering those particles out of the beer is a nightmare and picking the granules out of your teeth in between sips is not a satisfying drinking experience. Every day’s a school day.

How long should the coffee be in the beer for?

This is where it really comes down to personal taste. If you are adding coffee to the fermenter then my recommendation would be to use sterilised equipment to take a sample every couple of days. When the coffee character is at a level you are happy with, either rack the beer out of the fermenter or remove the bag of coffee beans.

If you are adding brewed coffee prior to packaging then there is no set rule for how much to add so it will require some experimentation. Denny Conn and Drew Beechum (in their excellent book, ‘Experimental Homebrewing’) recommend taking a sample of your beer and adding coffee in measured amounts so that you can scale up once you are happy with the flavour contribution.’

So there are our tips for brewing with coffee. As with any adjunct, experimentation and a willingness to to try something new are key. Have you used coffee in your beers before?