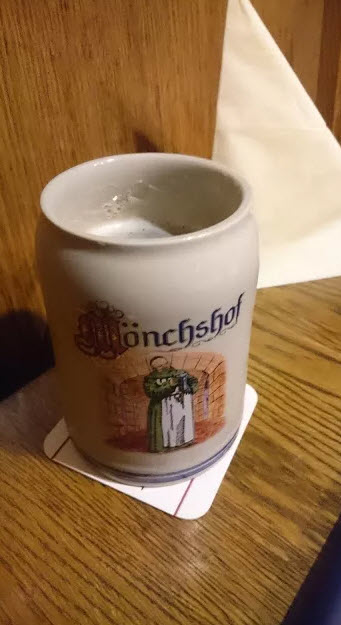 If you happened to be at the beverage trade industry event ‘Brau Beviale’ in Nuremberg over the last few days you may have seen a few of the guys from the Grainfather demonstrating the system at our stand (and giving away some great beers – let us know if you tried any). We caught up with Dave from the UK office to get some tips on a slightly unusual beer style that he enjoyed in Germany this week.

With this in mind, when I first came across Kellerbier I was expecting a similarly insipid, warm and flat beer – similar to some of bad cask conditioned ales I’ve sampled in the past. I was pleasantly surprised though that the beer was delicious. It is served very hazy and is often served relatively young for a lager (as the high amount of yeast can cause the beer to degrade quickly). As the beer deteriorates quickly it can be hard to get an authentic Kellerbier outside of Germany unless you brew one yourself as I plan to do.

For anyone looking to brew a Kellerbier at home there are several things to consider. The unfiltered, fresh nature of the beer makes it an ideal style for homebrewers whilst still presenting a challenge to the experienced brewer. As with many other lagers, the beer needs to be clean, dry and crisp and free from off flavours.

For malt choice you may be tempted to go with all German pilsner malt, but actually a good Kellerbier benefits from a high percentage of Munich malt to give it a slightly darker colour and maltier backbone. Aim for around 20-30% Munich malt in your mash. For strength you want to aim in the 5-6% ABV range. What I liked about the beer was its drinkability. It feels very low in terms of ABV and the malt character is the star of the show, backed up by some subtle hop additions (for authenticity you should use traditional German noble hop varieties).

As the beer is usually served straight from the cask it is conditioned and in some sources they say that homebrewers could try adding oak chips to the fermenter (which I do by soaking the oak chips in vodka to sanitise them before adding the vodka and chips to the fermenter). However, I couldn’t detect any strong oak flavours in the beers I sampled so if you do choose to do this be careful that the wood flavour doesn’t overpower the subtlety of the beer.

The final consideration is that to emulate the ‘cask’ element your carbonation should be very low so keep priming sugar to a minimum or use just enough pressure to serve if kegging the beer.

For the Kellerbier that I plan on doing I’m going to go for the following recipe;

I’ll ferment this with a clean, bottom fermenting lager yeast such as Mangrove Jack’s M84 Bohemian Lager and ferment at a temperature of 12°C.

Have you ever made your own German style kellerbier? How did it turn out?