Home › Articles › Sparge VS No Sparge

Sparge VS No Sparge The ‘no sparge’ method is something that has really taken off amongst all grain brewers recently. Allowing you to finish a brew day quicker, the method involves adding all of your brewing liquor at the mashing stage, instead of rinsing the grain with a proportion of your water after the mash is completed.
The issue that some brewers have with this method is that it gives you a high liquor to grain ratio (which can make it difficult to hit correct temperatures and affect the body of the end beer) and that efficiency will be lower than it would be in the same beer with a sparge step.
JK was interested to test if the benefits of the no sparge method (shorter brew day, no need for a sparge water vessel) outweighed the potential pitfalls. He decided to brew the same beer twice with the only difference being that one of the beers would be sparged and the other would not be. JK then asked people to blind taste the two beers and give feedback to see what effect (if any) skipping the sparge stage had on the beer.
For my recipe JK went super simple;
STATS:
OG: 1.046
FG: 1.012
ABV: 4.6%
IBU: 36.15
GRAINS:
4.3kg Marris Otter (95.6%)
0.2kg Crystal (4.4%)
HOPS:
10g Nelson Sauvin at 60 minutes (14.96 IBU)
130g Nelson Sauvin at Whirlpool (21.20 IBU)
YEAST:
Mangrove Jack’s M44 – US West Coast
WATER CALCULATIONS:
SPARGE VERSION – For the sparge version of this experiment the calculation was;
4.5 (grain weight) x 2.7 + 3.5 = 15.65 L in the mash
So as he was only going for 15 L batches, JK worked out; 15.65 L in the mash minus the 4.5 L lost to the grain and the 2.5 L lost to the boil would give 8.65 so he needed 9.35 L of sparge water to get 18 L in the boil.
NO SPARGE VERSION – For this version JK added the mash and sparge water figures from above together (15.65 + 9.35) to calculate that he needed 25 L in the mash for this beer.
THE BREW:
The brewing went really easy. JK mashed both beers in at the same time on the two units he had set up and hit mash temperature really quickly (the hot water tap was coming out at 55°C and he was only aiming for strike temperature of 67°C).
JK mashed in and began recirculation and pretty soon was getting really clear wort that you can see in the pictures below; 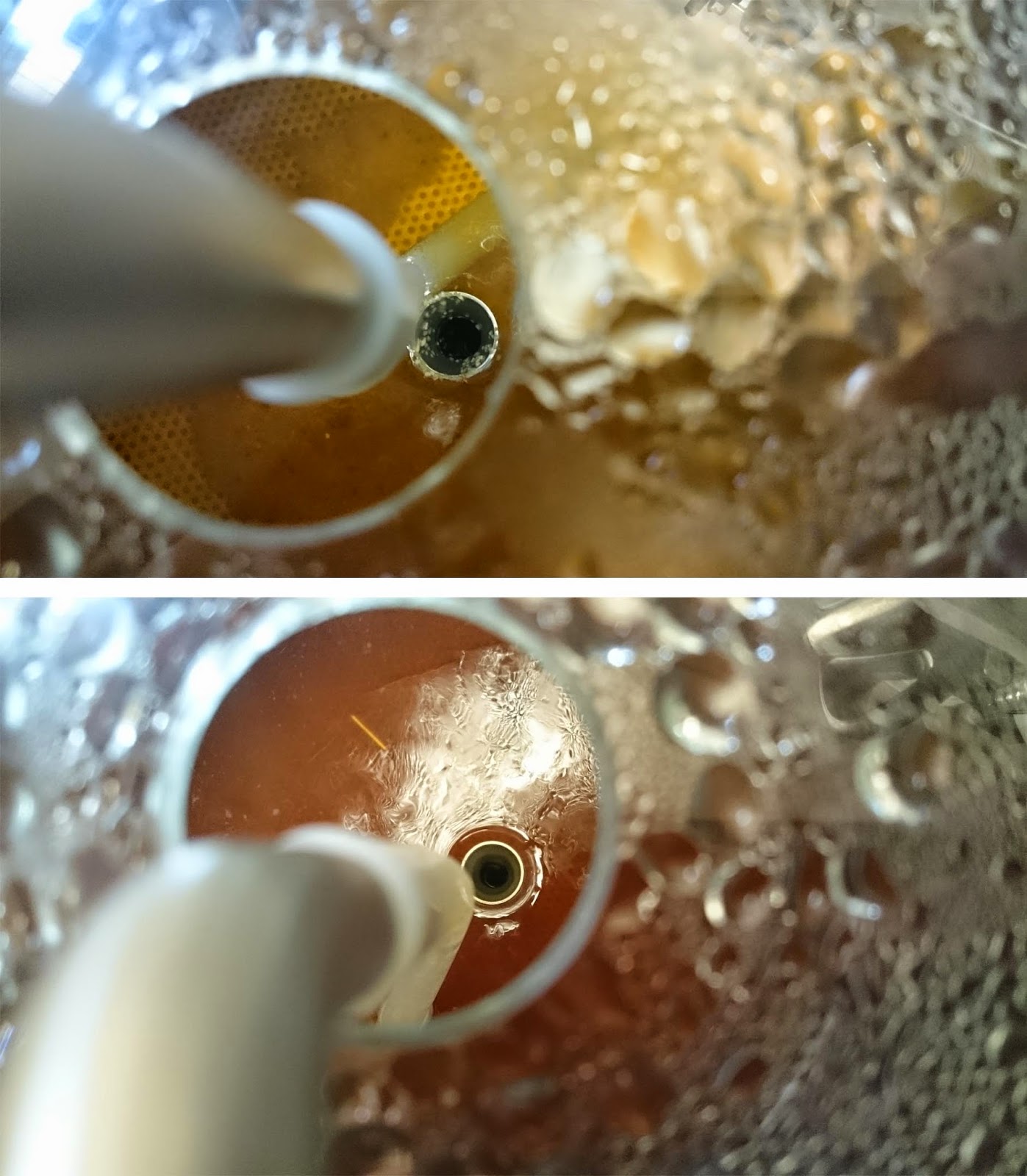 JK mashed both beers for an hour. Once that was up he pulled up the baskets on each and allowed them to drain fully. For the no sparge beer this was done and ready to be set to boil. After setting this he began to fly sparge the second beer. Once the sparge was over JK had 18 L in both boilers which he was happy with. He took a preboil sample and added the start of boil hops.
At the end of the boil JK added protafloc and end of boil hops and took another gravity sample before chilling the two worts down to pitching temperature, ready for fermenting. 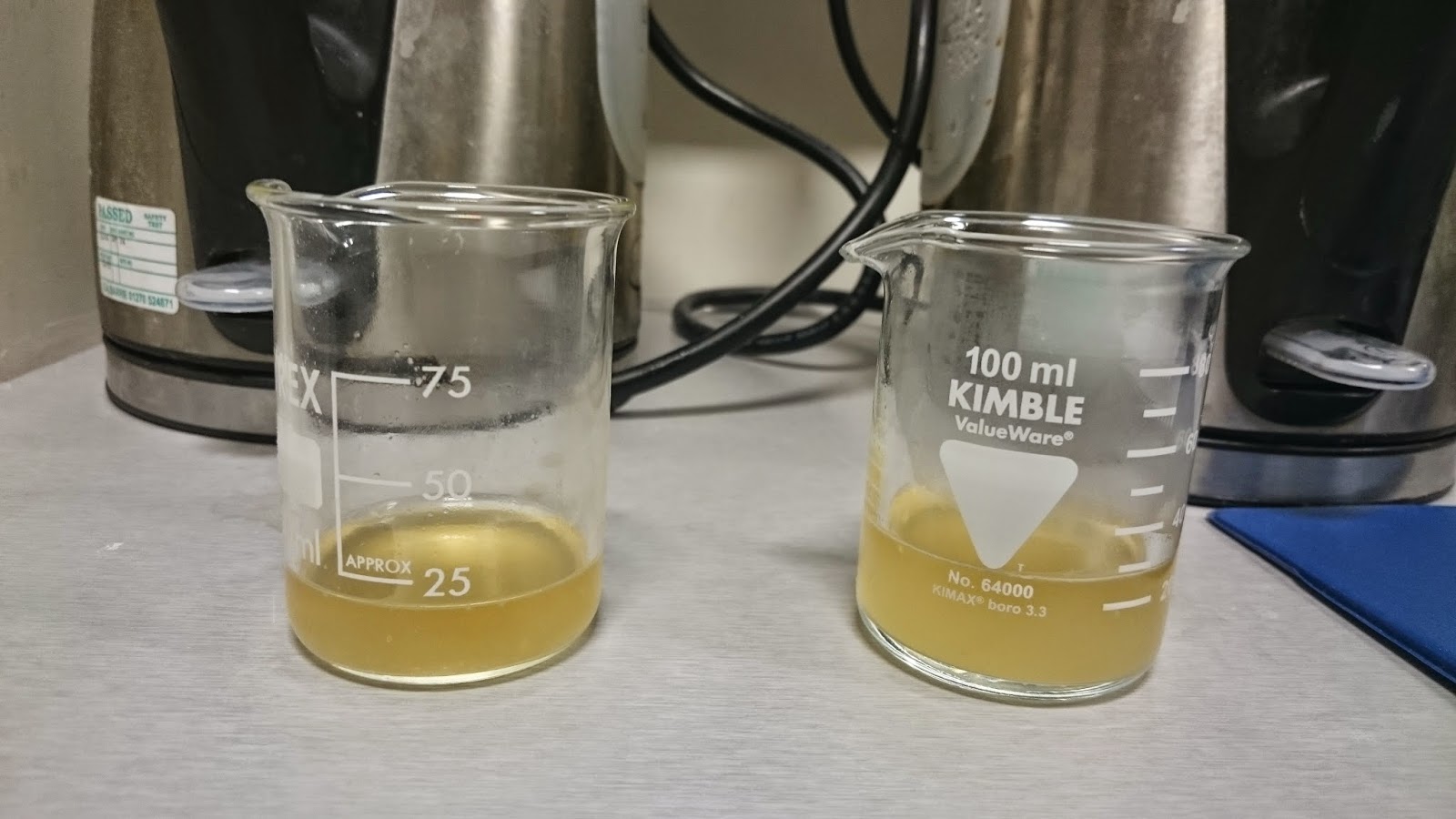 Gravities at the end of boil were;
1.060 – sparge
1.045 – no sparge (1 point off of target FG)
So sparge had an efficiency of 63.4% and no sparge had an efficiency of 47.52% making for a difference of around 16%.
RESULTS:
The tasting was done as a blind triangle tasting, with two glasses of beer being the same (eg. Both sparge or both not sparged) and one glass different. All tasters where asked which beer did they prefer and if they could identify the one different beer.

The results were almost unanimous – 9 out of 10 people preferred the sparged beer and 8 out of 10 people correctly identified the different beer with some tasters mentioning they felt the no sparge beer was thinner, metallic and didn’t carry the bitterness or fruit aroma as well as the sparged beer.
CONCLUSION:
The no sparge beer tales a big hit on efficiency when compared to the sparged beer and when given to a panel of tasters the majority were able to identify the difference and preferred the sparged beer.
JK was happy with both beers and would drink either though it was very obvious that the sparged beer was better, with a more rounded flavour and better aroma. JK suggests if you’re looking to save time on the brew day you can get away with skipping the sparge step but if you’re looking to make a beer that is better than ‘passable’ then sparging is a very necessary step.