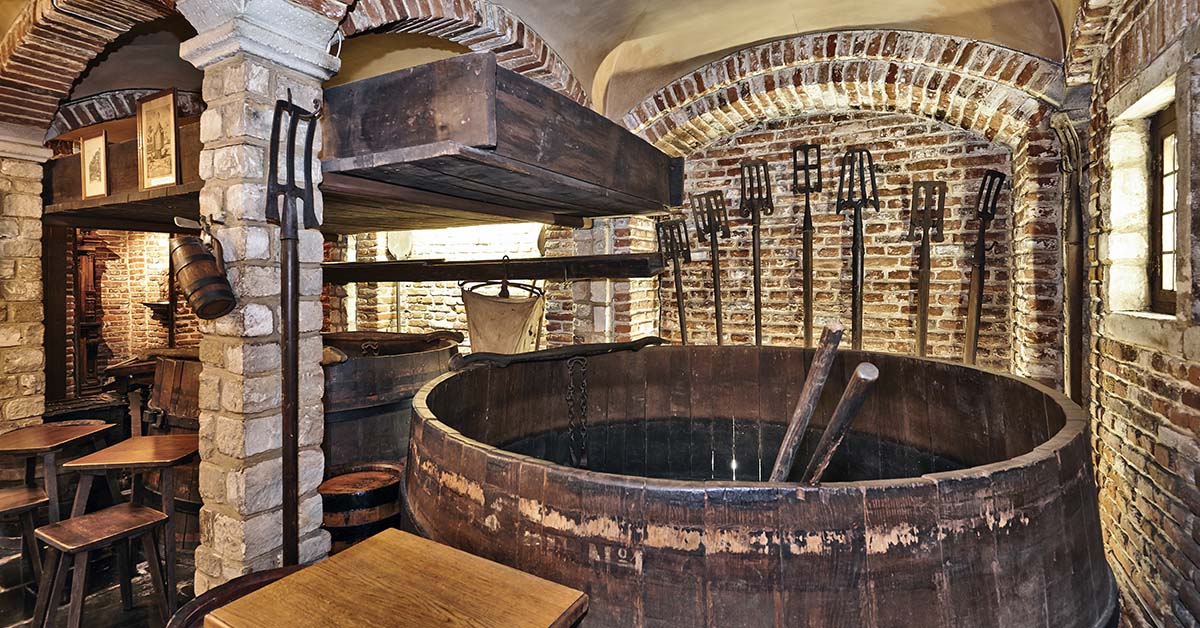 Beer in the middle ages

The middle ages is the time when beer became the drink that we know it as today, but with the production of beer for sale came the start of alcohol taxation.

Before the middle ages (5th– 15th Century) in Europe, all beer was brewed without hops, but instead seasoned with a blend of herbs and spices called “gruit”. This was sold to the breweries by the Gruitretch that was generally controlled by either the state or the church, this practice was an early form of taxation on beer.

The blend of spices and herbs used for gruit was a big secret to stop counterfeiting, but what was commonly used from the little information recorded was; bog myrtle (sweet gale), yarrow, wild rosemary and then whatever spices and herbs were around like juniper berries, cinnamon, ginger and nutmeg. The addition of the gruit tended to make these beers darker in colour and the Brewers were known as ‘red’ beer brewers.

Hops started to become dominant in beer in the free cities of Europe (mostly Germany) since these were outside of the reach of the church and were then not required to use gruit in their beers. These hop brewers tended to have a high portion of wheat in the grain bill, and were known as ‘white’ brewers. Hopped beer spread throughout Europe and eventually washed up on the shores of Brittan along with the influx of Flemish immigrants of the time. Around this point, gruit beer was generally referred to as ale and hopped beers were referred to as beer.

The success of hopped beer is mainly due to the preservative action of the hops, the hops allowed mid to low alcohol beer to remain unspoiled for a few months rather than a few weeks and by the 16th century, all ales and beers had some measures of hops.

Beer and the Industrial Revolution

The industrial revolution saw a boom in technology, which had a direct impact on the styles of beer produced, their repeatability, the amount that could be produced and how far it could be shipped.

With the advances in the technology of the industrial revolution like steam power, the thermometer, hydrometer, refrigeration, indirect malt kilning and cylindrical roasting meant that brewing could come larger and more consistent. The thermometer and hydrometer meant that more accurate readings of each beer brewed allowing the brewers to dial in their recipes and increase efficiency. Steam power and refrigeration allowed breweries to produce more beer and ship it to further around the world. Indirect kilning of malt removed the smoky flavour from malt allowing for light, crisp, non-smokey beers, while cylindrical roasting gave rise to darker malts than the current brown and amber malts of the time

These new darker malts gave rise to arguably England’s most important beer style of the 17th century, the porter, which English breweries were producing over a million barrels a year by the end of the century. In the early 1800’s new breweries required more money finance to fund than any other business except a bank. With these demands both financially and production, the Brewers were forced to find cost and efficiencies. At this time many other great styles also rose into the spotlight like the English pale ale and the Czech pilsner.